The Political Dynamics of Urban Expansion in the Toronto Region, 1924-2003 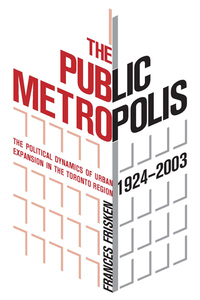 The Public Metropolis traces the evolution of Ontario government responses to rapid population growth and outward expansion in the Toronto city region over an eighty-year period. Frisken rigorously describes the many institutions and policies that were put in place at different times to provide services of region-wide importance and skilfully assesses the extent to which those institutions and policies managed to achieve objectives commonly identified with effective regional governance.

Although the province acted sporadically and often reluctantly in the face of regional population growth and expansion, Frisken argues that its various interventions nonetheless contributed to the region's most noteworthy achievement: a core city that continued to thrive while many other North American cities were experiencing population, economic, and social decline.

This perceptive and comprehensive examination of issues related to the evolution of city regions is critical reading not only for those teaching and researching in the field, but also for city and regional planners, officials at all levels of government, and urban historians.

The research, writing, and publication of this book has been supported by the Neptis Foundation.

Introduction: Growth-Related Challenges Redefined
The Origins and Evolution of Policies for a City-Centred Region
Finance: The Driving Concern
Consequences of Three-Tier Governance for the Regional Agenda

Why the Ontario Government Backed Away from Regionalism
Institutional Adaptations to Regional Change
Financing Regional Services: An Emphasis on Restraint and Financial Restructuring
Consequences for the Regional Agenda

The Re-emergence of Regional Issues
Incremental Regionalism
The Financial Challenges: Grappling with Declining Federal Government Support and a Major Recession
Consequences for Regional Governance: Much Discussion but Few Accomplishments

Request a Review CopyThis book is not yet published. Submit your request to receive your advance electronic review copy.