The History of Immigration and Racism in Canada 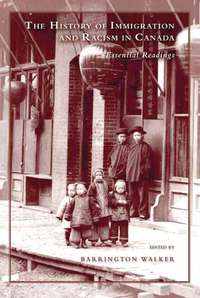 This outstanding collection examines the complex and disturbing history of immigration and racism in Canada. Major themes include Native/non-Native contact, migration and settlement in the nineteenth century, immigrant workers and radicalism, human rights, internment during WWII, and racism of the present day.

The readings are divided into five cohesive sections:


This book is destined to make its mark in History departments across the country and will also be of interest to students and researchers in Canadian Studies, Sociology, Demography, Political Science, and Geography.

A History of Human Rights in Canada

Dark Side of the Nation

PART III: Dangerous Others: Non-Citizens and the State
Chapter 8: Two Acres and a Cow: "Peasant" Farming for the Indians of the Northwest, 1889–97 — Sarah A. Carter
Chapter 9: European Immigrant Workers and Labour Protest in Peace and War, 1896–1919 — Donald Avery
Chapter 10: "Mixing with People on Spadina": The Tense Relations between Non-Jewish Workers and Jewish Workers — Ruth A. Frager
Chapter 11: Proletarian Ideology — Carmela Patrias