Spirit in the Political Quest for a Just World 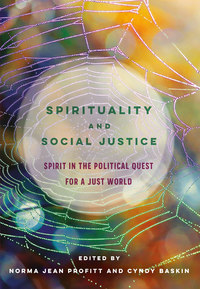 Filling the gap in literature on spirituality and social work, this textbook is uniquely dedicated to connecting faith and social justice in various social work contexts. Contributors offer a diverse range of research and experience that place spirituality at the heart of social workers’ pursuit of equality and fairness. Five sections contextualize belief in areas of environmentalism, ethics, politics, resistance, and social work education. Throughout the book, students gain access to pertinent topics, such as decolonization, artistic practice, mindfulness, feminism, political activism, and eco-justice, through a wide range of national and international cultural practices, including Islam, Quechua, Wicca, and Indigenous spiritualities. Students in social work, sociology, community nursing, counselling, and education who study the relationship between spirituality, social justice, and social work will benefit from this text.

Part One: Indigenous Spirituality as Resistance and Decolonization

Chapter 1: Reconnecting to Creation: A Spirit of Decolonizing
Kathy Absolon

Chapter 8: Christianity as a Political Force: From Theory to Action
Martha Wiebe

Chapter 9: The Spiritual Is Political: Owning Our Interconnectedness in the Pursuit of Social Healing
Nancy Ross and Jean Morrison

Chapter 10: Weaving Together Mind, Body, and Spirit in the Pursuit of Social Justice: An Example of Mindfulness and Critical Social Work Education
Tracey Lavoie and Ellen Katz