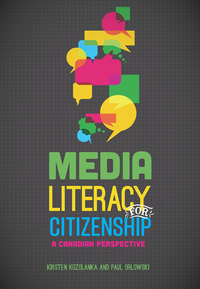 Offering a critical perspective, Media Literacy for Citizenship emphasizes the ability to analyze media messages as a fundamental component of engaged citizenship. The first five chapters explore the landscape of media today, while the next four chapters present critical insight into special topics that include climate change, diversity in Canada, Indigenous issues, and war and terror. The concluding chapter discusses the role and future of journalism in society. Each chapter forms a mini-lesson and encompasses three core elements: an essay on a subject area important to critical media literacy; a list of case examples that can be used for assignments; and a list of key terms common to all chapters and cases. The diverse topics of study and the rich pedagogy make this book a perfect resource for courses in communications, journalism, media studies, and education.

Women and Popular Culture in Canada

Professional Communications in the Public Sector

Chapter 1: Ideology Critique and the Media in an Era of Neoliberalism  1

Chapter 2: Building an Inclusive Society: The Role of Alternative Media  24

Chapter 3: Democracy in a Changing Landscape of Media Sources  44

Chapter 4: Media Literacy in an Era of Fake News and Alternative Facts  70

Chapter 5: The Public Media Challenge in a Fractured Media Society  99

Chapter 6: the “science” of climate change and the (Mis)informed Citizen  119

Chapter 7: The Other: The Canadian Mosaic Hits a Roadblock?  145

Chapter 8: Indigenous Representation in the Media  164

Chapter 9: War and Terror: Militarization and the Fearful Citizen  193

Chapter 10: The Role and Future of Journalism in Society  210