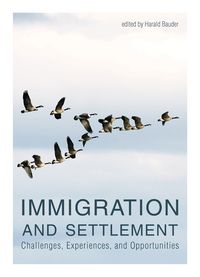 Immigration and Settlement: Challenges, Experiences, and Opportunities draws on a selection of papers that were presented at the international Migration and the Global City conference at Toronto Metropolitan University in October of 2010. Through the use of international and Canadian perspectives, this book examines the contemporary challenges, experiences, and opportunities of immigration and settlement in global, Canadian, and Torontonian contexts.

In seventeen comprehensive chapters, this text approaches immigration and settlement from various thematic angles, including: rights, state, and citizenship; immigrants as labour; communities and identities; housing and residential contexts; and emerging opportunities. Immigration and Settlement will be of interest to academics, researchers and students, policy-makers, NGOs and settlement practitioners, and activists and community organizers.

Multiculturalism and Immigration in Canada

PrefaceAcknowledgementsContributorsIntroductionPart One: Rights, State, CitizenshipChapter 1: Human Rights and the Paradox of the CityChapter 2: Jus Domicile: A Pathway to Citizenship for Temporary Foreign Workers?Chapter 3: Race in Democratic Spaces: The Politics of Racial Embodiment in the City of TorontoPart Two: Migrants as LabourChapter 4: The Global City as Political Opportunity Structure for Immigrant Workers’ Struggle: The Case of Domestic Worker Organizing in New York CityChapter 5: Protecting Temporary Labour Migrants: An Emerging Role for Global Cities?Chapter 6: Articulating the Self to the Engineering Market: Chinese Immigrants’ Experiences from a Critical Transformative Learning PerspectiveChapter 7: Making a “Global” City: Racialization, Precariousness, and Regulation in the Toronto Taxi IndustryPart Three: Identities and CommunitiesChapter 8: Investigating Dimensions of Cross-National Marriages: A Case of Russian-Speaking Wives in JapanChapter 9: Recent Immigrants, Earlier Immigrants, and the Canadian-Born: Association with Collective IdentitiesChapter 10: Religious and Secular Identities in a Plural CanadaChapter 11: Moving Around the World: Russian Jews from Israel in TorontoPart Four: Housing and Residential ContextChapter 12: Social Housing as a Tool for Ethnic Integration in Europe: A Critical View of the Italian ExperienceChapter 13: Hidden Homelessness in the Greater Toronto Area’s Newcomer Communities: Signs, Symptoms, and SolutionsChapter 14: Everyday Lives in Vertical Neighbourhoods: Exploring Bangladeshi Residential Spaces in TorontoPart Five: Emerging OpportunitiesChapter 15: Creating and Channelling Refugee Political Activities: The Role of Refugee Organization Building ProgramsChapter 16: International Students as ImmigrantsChapter 17: The Settlement of Young Newcomer Children: Perspectives for Policy and Program Development